*Note:  We now upload videos to our Youtube Channel every Friday.  Everything from adventures and ride reports to tips, tricks, and hacks for mountain biking, bikepacking, etc.  Please subscribe to us on Youtube and stay up to date!

This is a trip I took in March, 2010 – way before I started blogging.  Since I really dig the “blog” as a “personal journal” more than anything – I figured I’d post about it now, so I’ll always remember this awesome (although sketchy at times) trip!!- better late than never, right? 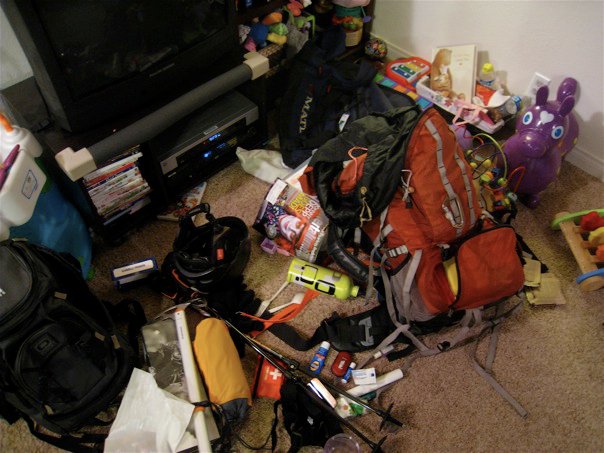 packing… yes, i had to take Lucy’s purple Roddy horse

My homie, Matt and his brother, Todd decided they wanted to climb Mt. Whitney in March.  They had done it a couple times before, and were itching to do it again.  We had a ton of snow already, so obviously, skinning up was the only way to approach.  They hit me up about 2 weeks before, and asked if I wanted to join- of course, I said hells yeah.  Both Matt and Todd have lot of climbing and mountaineering experience (Matt has stood on top of Everest, Denali, etc).  I do a good amount of backcountry skiing and snowboarding, and have Avalanche Awareness classes under my belt- so at least I wasn’t a total noob… but I’d never camped in snow or freezing temps before, so I was stoked to learn a lot from these locos.  Our plan- drive as far up Mt. Whitney Portal Rd. as possible (only got to 7,100′ because of all the snow), skin up to Lower Boy Scout Lake (11,000′), camp for the night, get up early and summit @ 14,505′ with a light pack, and ski down, back to the car before dark.  Simple, right? 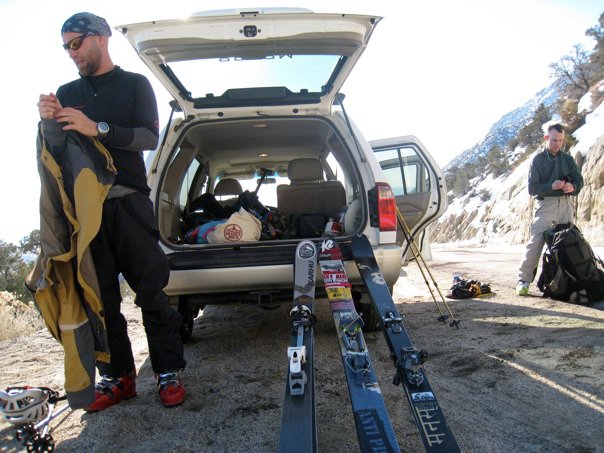 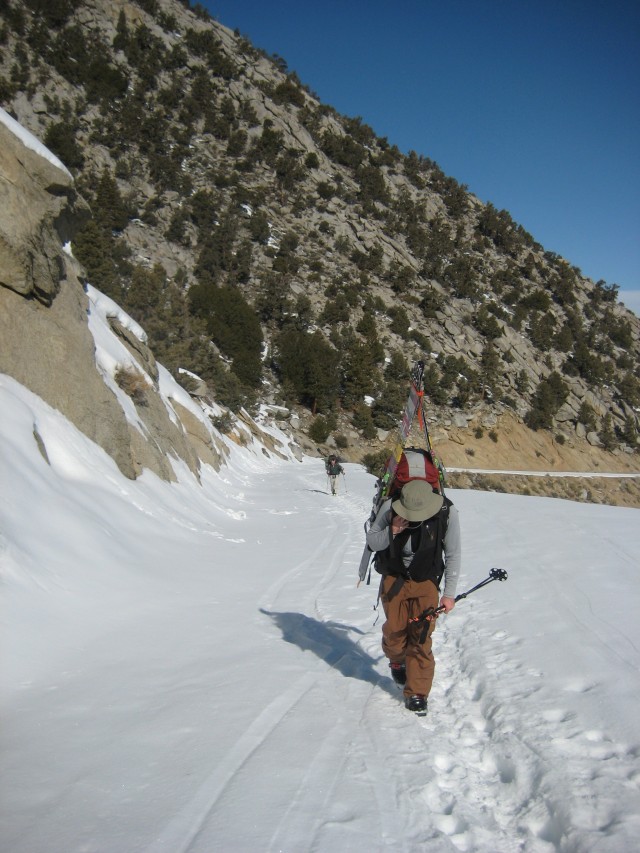 the snow-covered road was a great warm up

the road to Mt. Whitney- good times ahead

I had to buy crampons and an ice axe from Mammoth Mountaineering Supply – other than that, I was ready to go.  Matt, being the mountain man he is, had an extra pack and sleeping bag for me.  Since I had the “coldest” sleeping bag, I slept between the brothers, to suck up some of their warmth.  Todd was the chef, and carried most of the food and cooking supplies.  Matt carried the tent.  What did I carry?  Just my sleeping bag, clothing, snacks, water, crampons, ice axe, avy gear, skis, skins, etc – but it felt pretty darn heavy!!

Once we started up, we got into a nice pace.  We averaged about 1,000′ gain/ hour climbing at a reasonable pace, and rested for a few minutes every hour to eat, drink, and peep the wicked views. 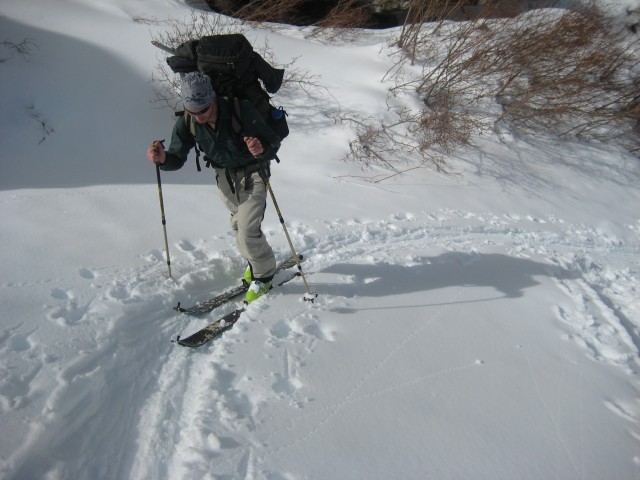 Todd, making his way up the skin track

Luckily, I’m acclimated by living at 8,000′, and I felt very good.   After hiking for 4-5 hours, we finally got to the spot we called home for the night.

our base camp for the night

setting up camp near Lower Boy Scout Lake, around 11,000′

The forecast was for cold weather and a little wind, but forecasts obviously don’t mean much around mountains that create their own weather systems.  So we came prepared for the worst- including sub-zero temps, and the possibility of being holed up for a couple of nights.  I’m glad we did.  My Rab puffy and down booties were indispensable.  The winds started picking up as the sun dropped.  We set up the tent in a protected spot, somewhat blocked by the wind, and got all dialed in.  We built a snow wall, and a nice vestibule to cook and eat in. 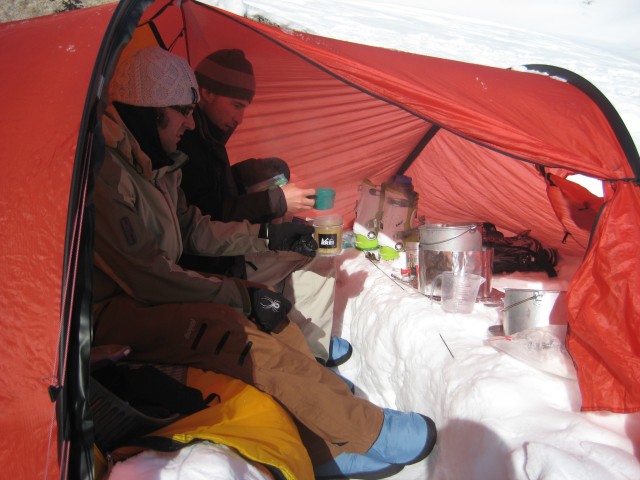 chillaxin in our tent

After I had the chance to sit for a couple minutes, I felt my body starting to seize up.  Not good.  Cramping?  What?  I thought I’d hydrated enough, but apparently not so.  My legs were cramping like crazy- so I tried to drink a bunch of water, and even after dinner they were still not complying.

kickin’ it – trying to fight off some major cramps

Chef Todd, about to make some yummy soup

Otherwise, I felt great.  It got super cold in a jiffy, and the winds were howling so we got in our bags and turned in early.  The cramping was devastating.  Being stuffed into a mummy bag wasn’t helping things.  I tried to keep the legs stretched, but any time I’d re-adjust, the knife would dig into my hamstrings.  Since I was drinking so much water, I had to pee a bunch.  Every time I’d sit up to piss in my bottle (always double checking that I didn’t mistake my pee bottle for my water bottle), the cramps were excruciating.  We could barely sleep, as the wind was gusting over 75mph, slapping our tent around like a kite. 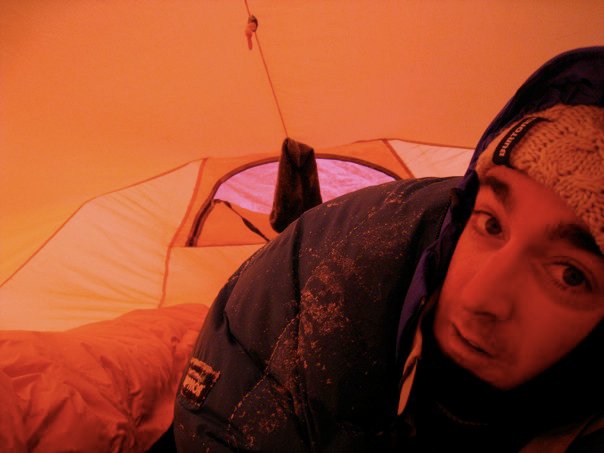 a sleepless night with 75mph winds slapping us around

Luckily we had a tent that had made it up Everest, because I thought for sure it would snap like a card house.  By the time morning came, the snow wall we had built was pretty much demolished, and we were buried in snow.  It took over an hour to dig our tent out.  This caused us to get a later start than anticipated for the summit.

our tent that we dug out, after getting buried by blowing snow all night

Todd decided to hang back- so it was just Matt and I donning our light packs, ready for the summit attempt. 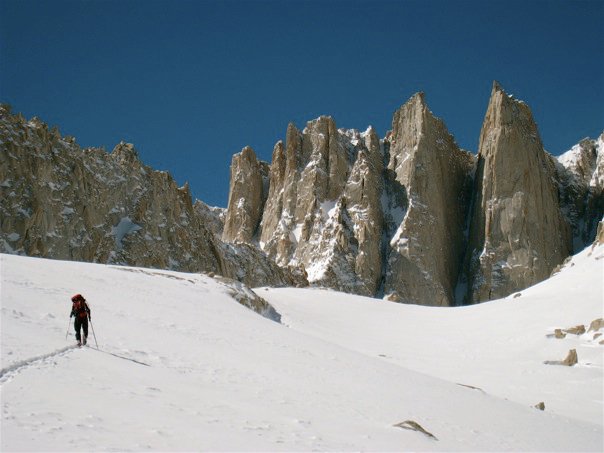 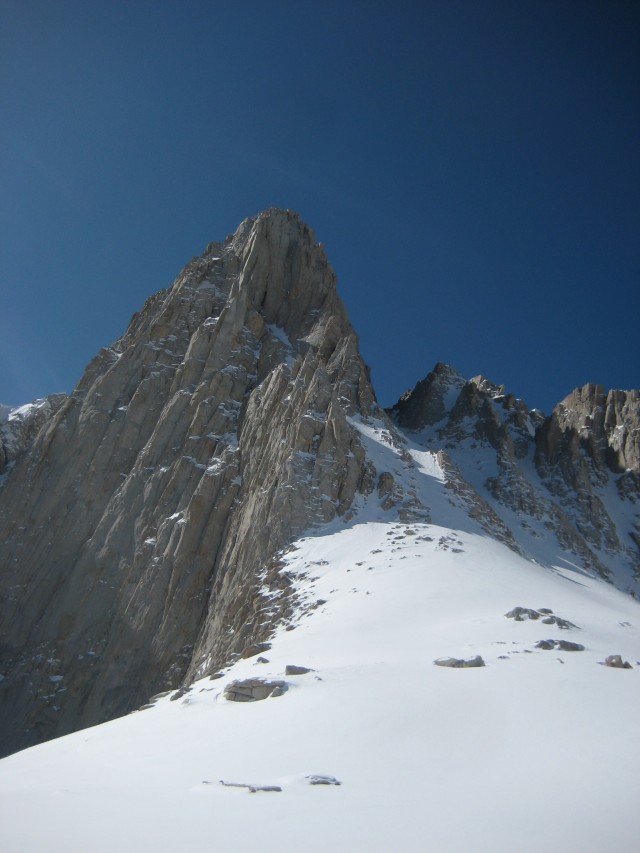 making our way towards the top- 500′ to go up that chute to the right, Mountaineers Route

Although it hadn’t snowed in over a week, the strong winds were eddying in over the top of the mountain, depositing lots of fresh snow in the chute we would be climbing for the last pitch around 400′ from the summit. 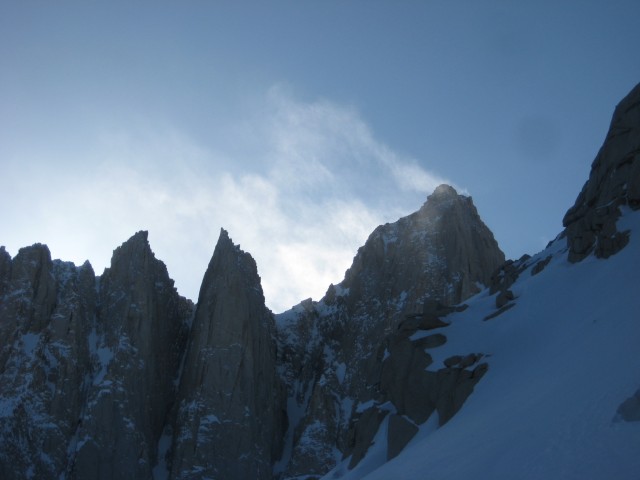 I knew that it would create some avalanche danger, and it was always in the back of my head, especially when we started up the chute around 2pm.  Too steep to skin, so we switched to crampons.  I was nervous about the fresh snow, and climbing up a 42-43 pitch (prime avy conditions).  We continued up, carefully, and the snow felt pretty stable. 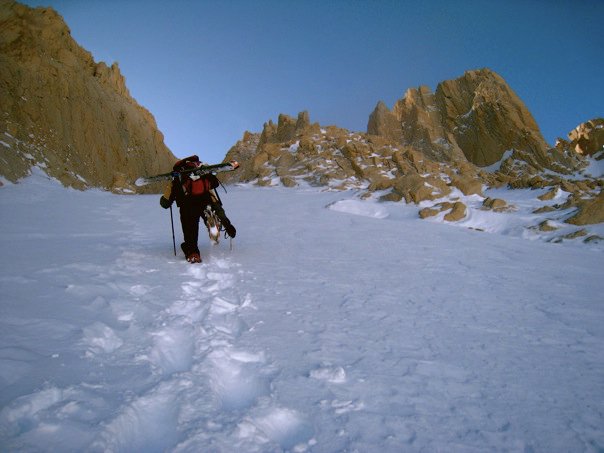 Matt, kicking the bootpack up the last chute on the Mountaineers Route

About 2/3 of the way up the chute, basically in no-man’s land, I heard what nobody ever wants to hear in the backcountry.  A “whoompf” noise.  I had never heard one before, but I knew exactly what it was.  I had a quick, “oh, shit” moment.  Matt didn’t hear it, but I explained that a “whoompf” is a settling of the snowpack, which is an indication of instability, and huge avalanche danger.  We had a couple of choices.  We could say screw it, pretend I didn’t hear it, and continue 400′ higher towards the summit, as we were losing daylight fast.  Or we could be stoked on how far we’d gotten, and cut our losses now.  We chose the latter.  Now we had to choose, do we climb down or ski down?  I wanted to ski, because I’m more comfy on skis, and we could move a heck of a lot faster, and I thought “skiing lightly” might have less chance of triggering a slide.  So although it was a treacherous spot to do so, we got our skis on, and readied for the descent.  We still weren’t taking any chances.  I had Matt stay to the side of the chute, in the most protected area possible.  I scoped my “escape route” and examined the fall line, should shit hit the fan.  I made a few ski cuts, and it felt fairly stable.  I then started skiing, and on my 2nd turn, I felt the rug get pulled up from under me.  I found out later, that the crown was about 20 yards above me, and I had no clue that there was a fracture until I was on my ass, sliding down the hill.  I tried to make myself “big” and keep from going under.  Luckily, after about 100 yards of feeling helpless, I was able to get on my feet, and ski out to the right- the escape route I scoped earlier.  The fall line broke slightly left, and I was safe. 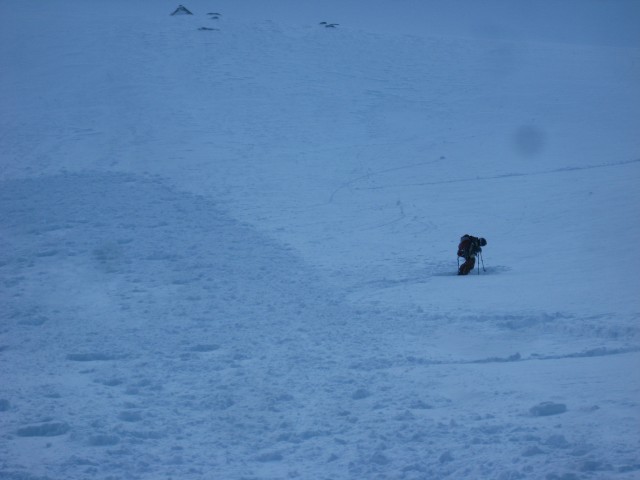 safely escaped the avalanche by skiing out to the right 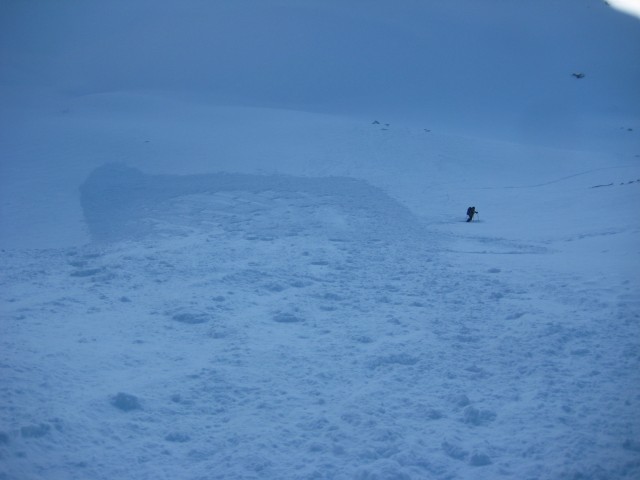 a wider view of the avalanche i triggered

the crown of the avalanche i set off

Needless to say, it was pretty sketchy.  Matt made his way down through the debris, and after a few minutes of thanking our lucky stars, we skied some decent snow back down to Todd, who was waiting for us at our old base camp.  We made good time back to the car- before dark.  Although we didn’t summit, it was an amazing trip.  We still got to 14,000′ and made the right decision to turn around when we did (though we should have turned back even earlier).  To this day, I still think about that trip, and get pissed at myself for my poor decision making on that day.  We should’ve turned around before attempting to climb that chute.  My senses were all warning me.  The winds carrying in the fresh snow, the pitch, everything about it was saying turn back.  I’m always conservative in the backcountry, and this was the worst mistake I’ve ever made.  Luckily, mother nature granted me the chance to learn from it.  She is always in charge. 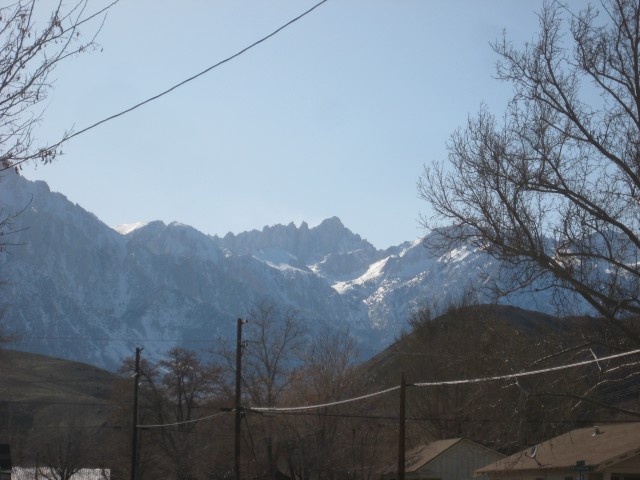 back in Lone Pine, looking back at Whitney

I will definitely make it back to summit Whitney, and ski down… maybe even this winter.  Next time, I will make sure I’m in killer shape, and it will be a dawn patrol, super light style… no camping, just a straight shot in one day… Hoot!