Quick version, so as not to bore:  I raced my trusty mountain bike to a 2nd Place finish in the Mens Singlespeed Solo division in the 18th Annual 24 Hours of Moab over the weekend.  Great race, great venue, great people.  Another sharpie line through an epic item on my bucket list – hoot!

If you’re not bored yet, read on until you are:

Unfortunately, this marked the 18th and final year of this magnificent event.  For many reasons, Granny Gear Productions (the promoters who’ve done it since day one), decided it was time to move on.  24 Hours of Moab is probably the most well known ultra endurance mountain bike race in the United States, if not the world.   Randomly enough, I first learned about it exactly 5 years ago (early October 2007) when I was in Ketchum, Idaho with the first Buried Life Tour.  We were interviewing Rebecca Rusch at her home (if you don’t know who “The Queen of Pain” is, you betta axe somebody) – talking about goal setting, what she wanted to do before she died, etc.  I was intrigued by her passion for riding,  especially since I had just bought my first mountain bike a month earlier and started riding the Mammoth Mountain Bike Park with friends.  When the interview was over, we chatted for a bit… and she told me she was just about to hit the road to Utah – to defend her crown at 24 Hours of Moab.  What was that?  Never heard of it…  She explained it to me, and I thought she was nuts… Let me get this straight… you ride your bike for 24 hours straight?  Just going in circles around the same 15 mile loop, over and over again?  Ride through the day, through the night, and into the day again?  Absolutely crazy.  Hmmm.  I liked the idea.  It stuck in my head, and I kept this autographed picture of Rebecca to remind me that I might wanna give it a shot one day… after all, I’d only been riding a bike for about a month… but who knew…

A reminder I kept from “The Queen of Pain”, that the 24 Hours of Moab was always lurking on my bucket list

Cut to February 2011.  I’d fallen in love with mountain biking, more specifically singlespeeds, and been racing endurance events on and off as work allowed.  I heard about this Topeak-Ergon Basecamp Contest on Facebook.  The male and female winner would be flown out all expenses paid to Sedona, Arizona to ride with the Team Topeak-Ergon for 4 days.  Sick!!  All you had to do is enter a video of why you should win.  Facebook votes and votes from the actual team members would decide the winner.  So I decided to make a short video about my goal of racing 24 hours of Moab.  Here’s the link to that video on Facebook

Somehow, I won the contest – and after riding with those amazing peeps in Sedona, I was motivated more than ever to get out to 24 Hours of Moab in 2011.  Unfortunately, an important job came up just before I was to leave for the race – and in my line of work, I have to take jobs when they come, so I can keep food on the table.  Plain and simple.  Moab was not to be for me in 2011.

Cut to NOW.  This was it.  Everybody knew this was the final chance to do Moab.  Now or never.  I really wanted to try the Cococino 25o, but my friend Tony in Mammoth was going to Moab, so we decided to carpool and pit together.  Although we had no support crew (Tony was also racing the SS Solo), it was nice to at least share pit duties and have someone to relate with.  MOAB was on!!

Can you step out of the vehicle, please – and back dat azz up. 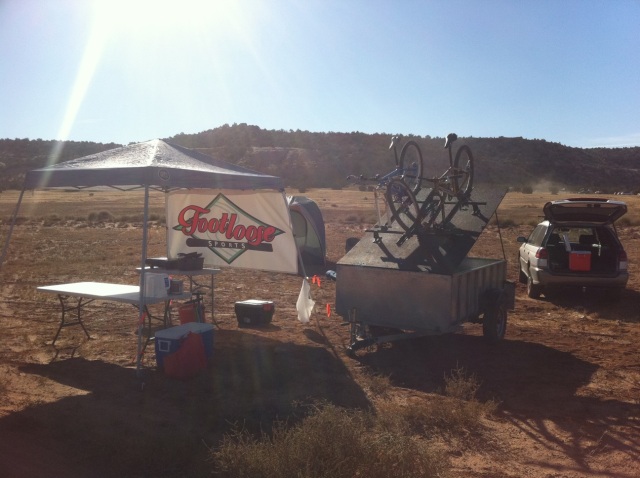 Setting up our camping/pit area on Friday morning.

getting close to Halloween! These looked really cool at night, but I never got around to getting a pic

sorry, Moab Action Photos – just don’t have $20 in the budget right now to buy the photo 😦

So elated to finally get this done, and super stoked that my first 24 hour race experience was Moab.  To get 2nd place, and stand on the podium where so many mountain biking legends have stood before, was such an honor, and a great sense of achievement.  Words can’t explain the giddiness as you watch the sunrise over the La Sal’s, and ambient light slowly creeps up, revealing the trail again as if it was a first date again after years of marriage.  Gandhi said, “When I go to sleep I die, when I awake, I am reborn.”  That was definitely the feeling as I struggled through the night, inching my way to dawn.  The hurt locker, the pain cave, the devil on the shoulder telling you to quit, the pickles and gu brew and raspberries and goldfish and pepperoni and whatever else you shove down your garbage disposal, constant battle between melting brain butter and uncompliant body, sleep deprived lunacy.  stop for a moment, look up – stars and moon, quiet solace, cloudy breathing, headlamps like fireflies in the faint distance… DIRTY TEETH, talking to myself, oh that Prostitute Butte… forward motion, get some.  Then you swipe that RFID for the last time.  It’s over.  Coulda woulda shoulda – gone faster.  That’s my first 24 hour race in a nutshell.  Did it really happen?  Sure I didn’t just dream it?  Haha!!  If my laundry wasn’t so stank and dank, I might have doubts that I really was there… 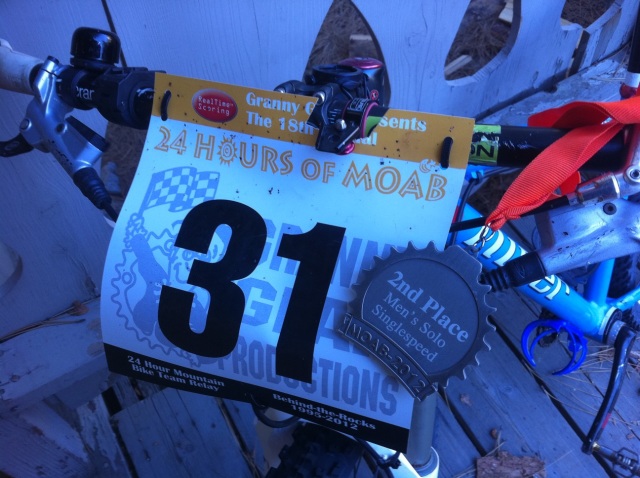 I’ve got a lot more to say, but I’m sure all that nutrition/bike prep junk is boring, so I’ll leave it alone now.  It’s safe to say that this won’t be my last 24 Hour Solo adventure.  On to the next…

P.S. – As always, thanks to Footloose Sports for the support – especially Glenn Miyata- here’s to another race with no mechanicals!… and Disabled Sports Eastern Sierra for constantly reminding me to be grateful for a healthy body and mind and to always focus on what we CAN DO.  Yes,  we CAN DO.