I’m a bum. Since getting home from SSWC, I went straight to Hawaii for a vacation with the fam.  All I did there was eat too much and drink too much, get in the water, and then eat a bit more and hula dance with Lucy.

Plumber’s crack near Waikiki – not mine 🙂 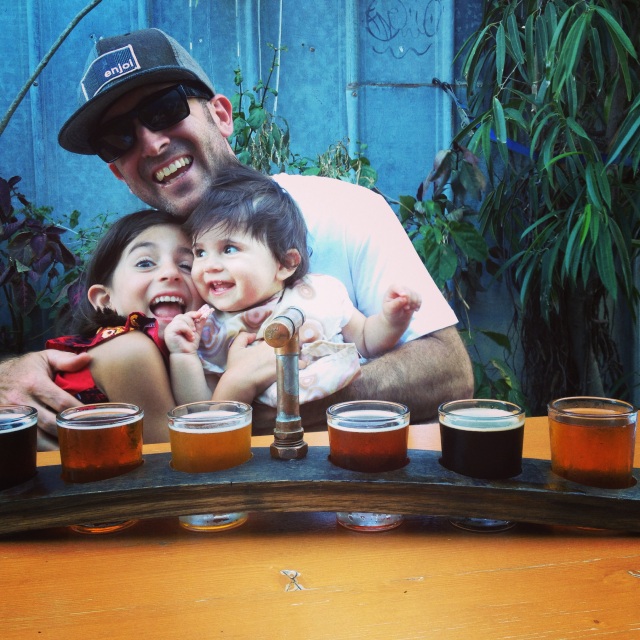 Hanging with my girlies at Honolulu Beerworks

My separated rib has finally healed.  Now that I can laugh and sneeze again, I need to get on the bike and build some fitness to have a go at the big rides planned in the near future. So when my homie Gabe hit me up and asked if I wanted to ride up Mammoth Mountain for the Super Moon Party, I was stoked. Why not? Everyone was paying $15 to ride the gondi up, and we rode up 3,500′ over 11 miles for free and the night turned out to be priceless!! We weren’t sure the moon would actually pop out, since it was fairly overcast- but who cares… Journey on. 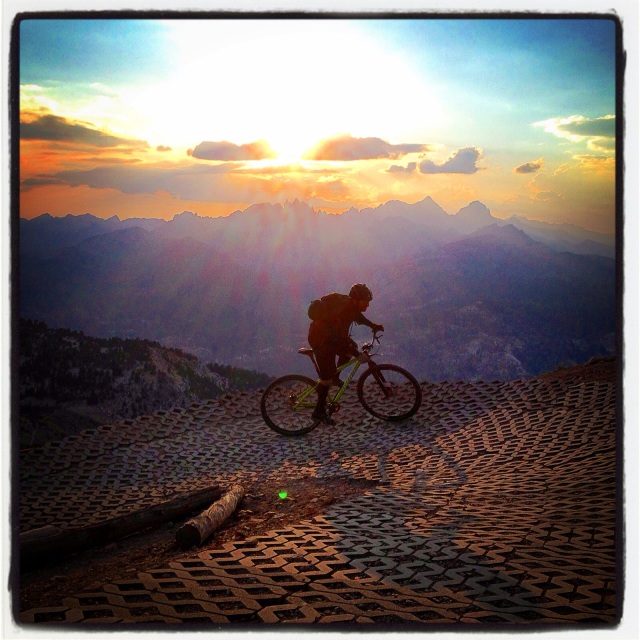 Gabe took this pic of me climbing a paver switchback on Off The Top. Look at that sick sunset over the Minarets behind me. Booyah!!

We spun Uptown to Brake Through to Gravy Train, jumped on Kamikaze for a little bit – such an ass kicker of a section, especially running 2:1 – then merged with Off The Top and my heart finally made it’s way back inside my rib cage. As we snaked up the paver switchbacks, we were rewarded with the sun setting behind the Minarets in spectacular fashion. Up above, we could spot hundreds of people silhouetted against the sky, as they were milling about, jockeying for a glimpse of the Super Moon rising. I heard there were over 700 people and I don’t doubt it. I’ve never seen so many people on the top at one time. Eventually we landed, and lots of people asked “Did you ride up? How are you gonna get down?” Weird that most people just don’t get it. To me, it’s a no-brainer. Ride or die!! Regulators, mount up.

It’s not often I get cool photos of myself riding (I usually ride by myself). So I’ll take the moment to post another one. Thanks, Gabe.

Anyhoo, the wind was picking up and it got chilly. After seeing the moon rise (it popped from the clouds – yahoo!), I ran inside and braved the long lines for a beer and a turkey melt.  In hindsight, I should’ve snapped some pics… oh well… They were already out of Epic IPA’s, but a McCoy Amber was just right- especially as we celebrated mother nature on McCoy’s mountain.  Squeezed out the last of the mustard from the farting Heinz bottle.  Lost Gabe for a bit in the packed crowds, but a nice host (I wish I had gotten her name) offered me her seat to warm up inside and eat my food. I listened to some fun live 80’s covers and watched some cool history on mining in Mammoth while I ate- btw, the new Eleven 53 interpretive center seems way better than before – I need to revisit when its not crowded with people howling at the moon.

A nice sunset view from the Gondola building. Don’t get to see this very often.

Somehow, Gabe and Amanda wound up in Clifford Mann’s truck, so I joined them. Nice and warm, and parked looking straight at the moon. Felt like a drive in movie. Glow sticks now lined the path to the Lakes Basin lookout and I could see the lights of our town below. I’d never been on top of the mountain after dark before, so this was a moment to relish.  What a delight.

The time had come. Layer up and go DOWN!!  We rode by moonlight and glowsticks past a sea of people and cush scented mountain air.  Then, once on singletrack- click, torches on, bombin Off The Top.  Our lights picked up areas of moisture not visible during the day… spots where the dirt is darker, and the line is primo.  Follow the dark lines, and you won’t get sucked in by the pumice. YES!!! Before I knew it, we were popping off to Gravy Train.  Then Recoil.  Then Twilight Zone.  Are you kidding me?!!  We were both smiling from ear to ear when we took a break to soak it in.  But no words could describe the Star Wars / Space Mountain ride we were having.  High fives were all we could muster.  We were both absorbed in “the zone”.  I was spinning out the gear I could barely turnover on the climb… as my forearm suspension soaked up all the turbulence.  It was fun trying to keep up with Gabe, but also not get too close… as the dirt he kicked up was like driving through a snowstorm with your high beams on.

Before we knew it, we were riding Uptown (backwards), and arrived at The Village.  What a glorious ride.  One that will stick with me for some time.  I know a while from now, when my mushy brain has long forgotten this adventure, I’ll be stoked I took a moment to write this down.