Word on the street is that some of the best singletrack in New Mexico hides out in the Manzanita Mountains of the Cibola National Forest near Tijeras.  OK.  Where the heck is Tijeras?  It’s only 20 minutes east of Albuquerque, just off of the I-40.  Nice.  Easy access.  I’m there.

A bridge crossing during a fast and tacky section of 05619 – better known as the Coyote Trail.

I will be coming back, too.  I only had time for a quicky, and it got me fired up for more.  From talking to locals, reading my books and maps, and doing my research on the interwebs – it appears I just nibbled the crusty part of the cheese.  That’s fine.  I like cheese.  A lot.

The Coyote/ Chamisoso Loop is a classic 11.7  mile loop with 1,300′ climbing.  Before hitting the trails, I stopped by the Ranger Station to get a paper map.  It was closed for the weekend.  Weird.  Seems like recreation is a big deal in these parts.  Budget cuts, I guess.  I found a pdf version of the map, and you can download it here:  Manzanita Mountains Trail System Map

Also, here’s a  Strava link for your perusal.  Nothing too crazy, but my legs are begging for rest on the weekends, so this excursion was plenty for me.  The ride is in my guide book and I had the map on my phone from the MTB Project app.  I also used that app to get directions to the trailhead, and it made the ride stress-free.  I’ve heard the area can be kinda confusing, but after all the prep, I found the trails to be well-marked and never came close to getting lost.  Another thing to note – it’s open to motorized use, and although it’s mostly singletrack, be prepared to encounter motocross bikes in addition to hikers, etc. 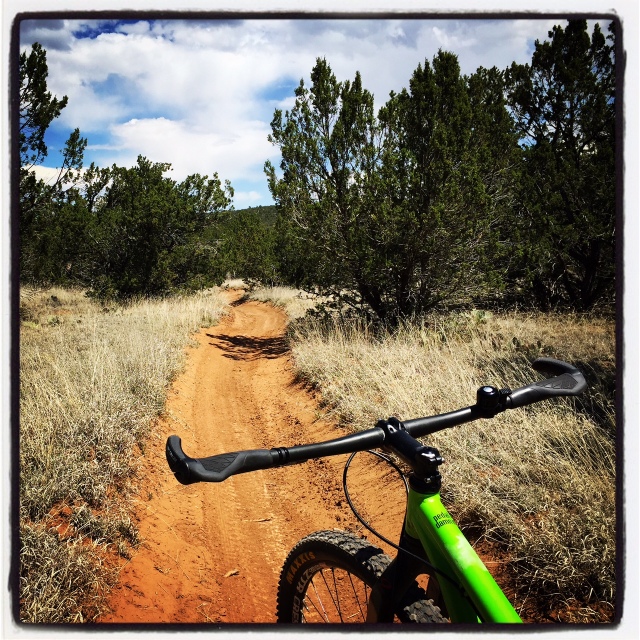 Another example of buff, tacky dirt on Coyote.

So did the riding live up to the hype?  Yes.  Maybe.  Coyote definitely had some super fun, fast sections – dipping in and out of arroyos and pinion forests.  It also had some techy climbing bits, ledges, and rock gardens strewn with baby heads… and  with some short steep efforts that had my lungs throwing middle fingers.  That is a good thing.  I jumped on Delbert’s Trail for a bit, which was a blast.  I loved it on my rigid, and can only imagine how much more fun it would be with some squish.  Then you hit Chamisoso – appropriately named…  it was “so-so”.  Maybe I’m just a singletrack snob… and maybe it was just too much hype.  Like when you go to see a movie that everyone raves about, it’s almost always just “meh”.   Either way, all the trails lent themselves to full-squish bikes, although rigid unit handled most of it without issue.  Until “psssshhhhh” and latex started squirting in my eyes.  Yup.  Got a puncture just towards the end of the ride.  Thank gosh for tubeless and Stans.  I always put an extra scoop of juice in when I’m gonna be out of town for a bit.  Served me well here.  After thirty seconds of squirting, it sealed right up and I only lost a couple psi.  My sunglasses took the brunt of it.

My sunglasses got doused with a fine mist of Stans Sealant, but my tire was sealed up in seconds!!

All in all, it was great riding.  Heck, every time I throw a leg over my bike and spin pedals I feel blessed.  That being said, I just dropped my family off at the airport before taking the ride, and my mind wasn’t as clear and happy as it usually is when I’m on my bike.  So I’ll assume I would have enjoyed it even more if I wasn’t in a gloomy funk.  So, what to do?  Well, there’s much more in the area to explore – Otero Canyon, Tunnel Trail, Cedro Peak, etc – so I’ll be back to Tijeras soon… and next time I won’t be such a Debbie Downer. 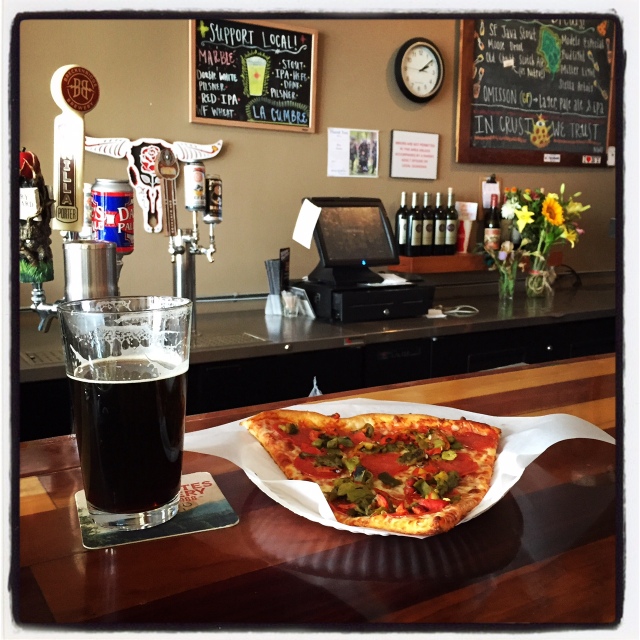 After the ride, I hit up Slice Parlor in Nob Hill (20 minutes away in Albuquerque) for a pizza and beer.  I went with the Zia slice – pepperoni and green chile.  BOOM!!  When in New Mexico, right?  The green chile added just the right amount of heat.  They’ve got a bunch of local beer on tap and I went with the Monk’s Dark Ale, from Abbey Brewing in nearby Abiquiú.  Great combo!!!  They also had Project Dank from La Cumbre on tap!!  Too bad I was driving — so one beer was enough.  Now that I got my feet wet in the Manzanita Mountains, I’m looking forward to hitting up some more of their premiere trails over the next few weeks before it gets too hot… more soon!