I love Idyllwild.  No need to pull my arm to make a trip out there and see Brendan and Mary at The Hub Cyclery and ride bikes with friends.  Plus, I never felt satisfied with the amount of Idyllwild trails I rode on the Stagecoach 400 – since it merely takes you in and out of Idyllwild as the beginning and end of a super duper lollipop. So when the Badger Race (re-named from the San Jacinto Enduro) lined up with my fickle schedule, it was on like Donkey Kong!  The perfect excuse to conquer 57 miles and 7,200′ of climbing on the best trails in the area!!  So Hunter and I jumped in the trusty Tacoma, and after a stop to fill growlers at Mountain Rambler Brewery, made our way to paradise. 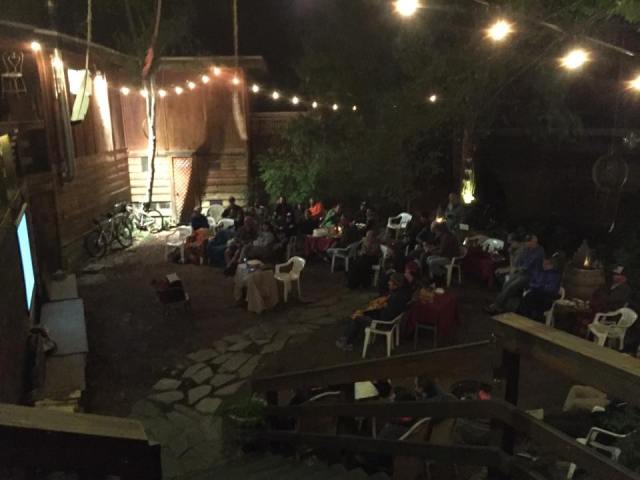 The venue for the movie screening did not suck.

The weekend started off with a movie screening of Inspired to Ride at a snazzy restaurant call Idyology.  Waited an hour for my burger, holding up my skunk cabbage sign.  It finally came and it was pretty darn good, so it made up for the wait.  Before the movie, Hunter played a short film of the 1980 Crested Butte to Aspen Klunker Race (I highly recommending clicking this link and watching both parts on youtube).  A great look back at mountain biking roots!   We all hooted and hollered and got fired up!!  Then, the movie itself was a pretty good way to get you jonesing to ride, as it chronicled last years Trans America Race.  The Italian lady in the movie was super annoying.  She’s a great racer, and demolished the female field… but her arrogance and constant competition with these other Italian guys got pretty over-cooked.  Other than that, it was a great glimpse into minds of ultra-endurance athletes pushing themselves to physical and mental limits.  My kinda stuff!! 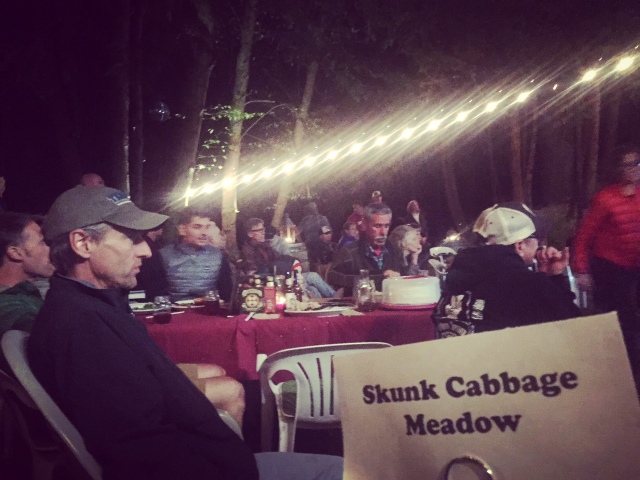 Holding up my skunk cabbage sign, waiting for my burger.

Quick note – Brendan and Mary raised $1,500 for the local school arts program with donations from the screening/race – super classy as always.

Hunter and I shared a room at the Idyllwild Inn, the same spot I stayed before and after the Stagecoach.  Funny, we got the exact same room, except this time, the queen size bed didn’t seem so huge when I was sharing it brokeback style with Hunter 🙂  Before we knew it, dawn cracked and the race was upon us! 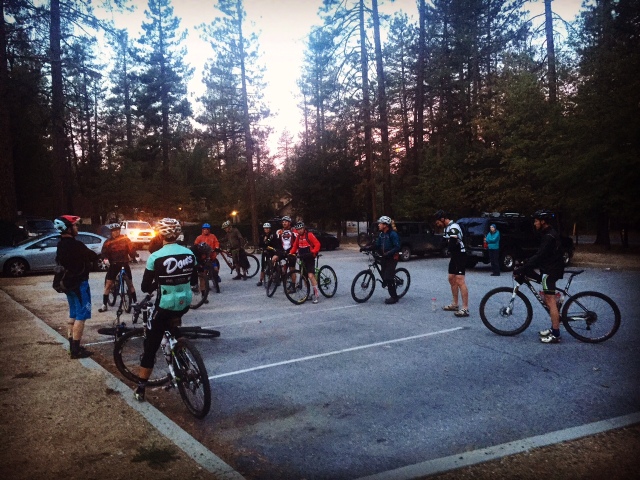 Get busy living or get busy dying.  Pre-race meeting. 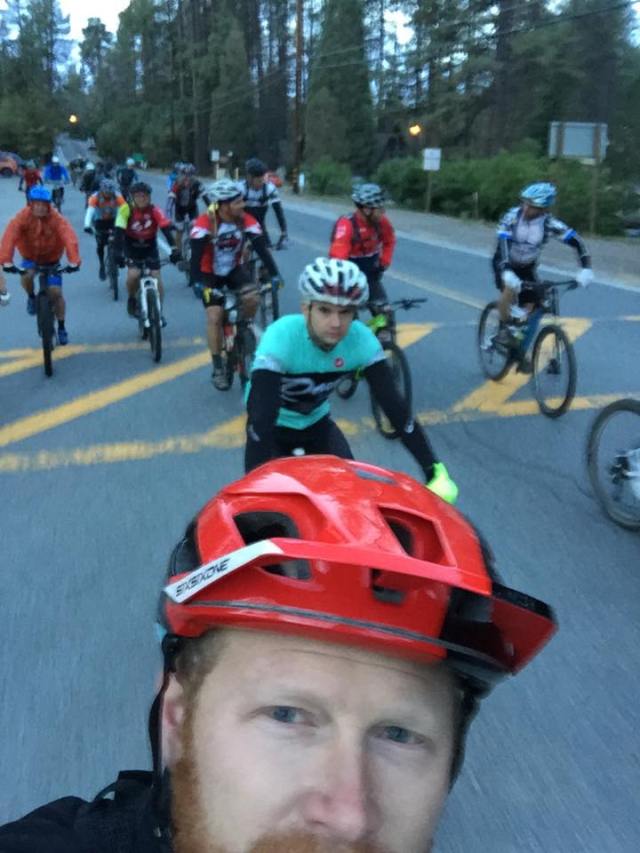 But first – Brendan’s selfie from the roll out.

Before you know it, it’s all over – another blur of a dream of surreal time spent on a bike.  Next thing you know, you’re kicking it on the Collier’s patio, re-hashing the day and hearing everyone’s highs and lows.  Went back to the room for a beer, a shower, then returned to the party.  Sitting in a fold out chair, wrapped in a blanket, with friends and coversation to fill the night.  Before long, the crisp night lets you see your breath, and the fire pit is glowing high and warm.  The Jeremiah Weed Whiskey from Walmart is spent, along with the Peach Triple from Mountain Rambler (so tasty!).  On cue, KC brought in reinforcement beer (oh the Pizza Port DIPA was spot on!!).  Brendan pulled some Omaha steaks from the freezer, Mary cooked potatoes, and Doug brought some canned creamed corn from his trailer.  As we had fellowship by firelight, I could not help but to feel so blessed for the company, and the beautiful family waiting for me at home.  Probably the best post-race meal I’ve had. 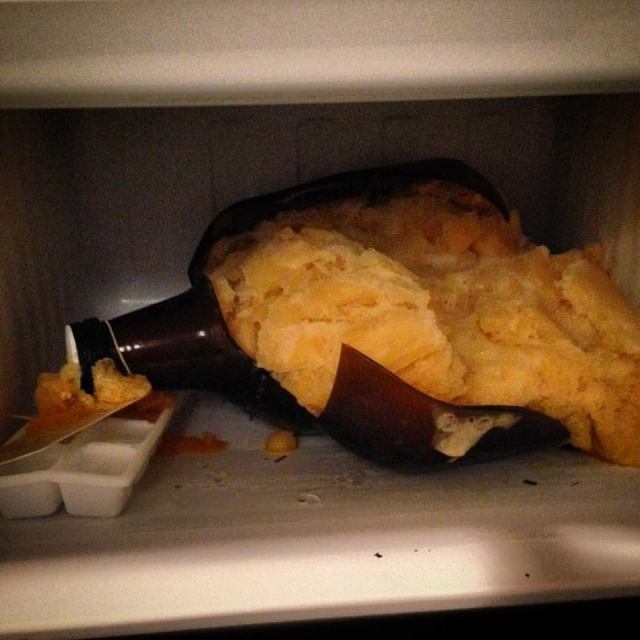 Oops. The broken growler Hunter left in the freezer.

Hunter had a growler of Skywalker Ale filled for KC, but left it in the freezer in our room. Oops.  next time…

This weekend was a great reminder of why I write this journal – so these memories don’t fade off into the abyss somewhere.  After bonking and cramping hard, and watching Tyrone blow past fresh as a daisy, I was extremely happy to finish at all.  When I found out I was 7th overall and 2nd SS (behind “Lightning Fast Freddie”) out of 31 or 32 starters, it was a pleasant surprise.  Strava link.  I would’ve been bumped to 8th, as Hunter was way in front of me, but he missed a critical turn and wound up doing bonus mileage and extra climbing right at the end 😦 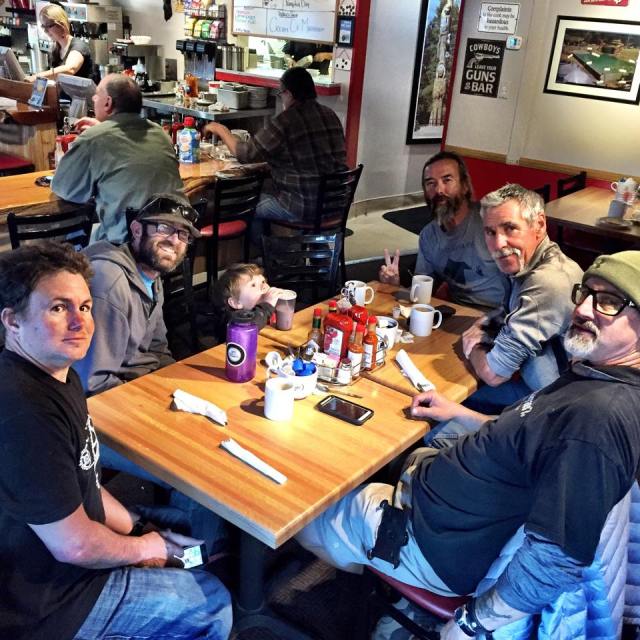 A breakfast quesadilla in the morning with the boys, then it was back to reality once more.  The ride home was filled with dreaming about the next adventure, and before I knew it, power hugs from Lucy and Molly and Mommy greeted me.  Life is good.  As Gandhi once said: